In today’s episode of Chembarathi, Vilasini slaps Kalyani when she refuses to come to Thrichambarath to help Ganga. 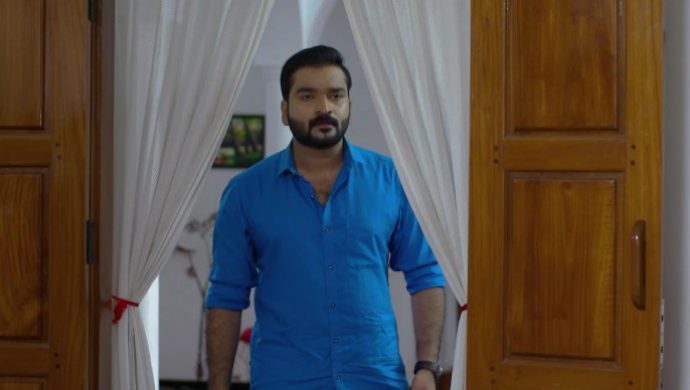 Previously on Chembarathi, Kalyani fixes the recording mic in Ganga’s room as per Anand’s instructions. Anand is reminded of how the detective had earlier told him about Ganga’s alias in Mumbai and gets disturbed when he thinks about Kalyani’s complaints about her.

Later at night, Anand tells Kalyani about how the family has called for a goldsmith to make the thali for his marriage the next day. Kalyani is surprised when Anand asks her to make payasam as it is a tradition in Thrichambarath for the girl who is getting married to make the same. Kalyani is elated by Anand’s requests and agrees to do the same.

In today’s episode of Chembarathi, Stella goes to Kalyani’s house to ask her to come and help Ganga in making the payasam. Kalyani tells her that she is feeling very ill and refuses to go. When Stella goes back to Thrichambarath, Vilasini stops her and yells at her for not getting Kalyani to come for the ceremony.

Vilasini goes to Kalyani’s house herself and orders her to come. When Kalyani refuses, Vilasini slaps her and the two get into a tussle. Das steps in at the right moment and asks Vilasini to leave Kalyani as she is unwell. Kalyani feels relieved when Das asks her to stay inside the house while he goes for work.

Meanwhile, Anand notices Ganga yelling at Sebastian in her room. Sebastian asks Ganga for a raise to continue acting as her father in Thrichambarath. Anand is shocked when he sees Ganga slapping her father. Ganga gets angry by Sebastian’s requests and slaps him again. She yells at him for ruining her plans when he got drunk with Aravind.

When Anand asks Ganga why she is slapping her father, Sebastian tells him that it’s her childhood habit. Anand recalls Kalyani’s warnings about Ganga and leaves the room by telling her that it is not ideal to hurt your parents. Ganga tells Sebastian to be careful as Anand has started doubting their motives.

Kalyani starts making payasam at her house, while Ganga makes it with the help of Vilasini and Jayanthi. Kalyani is surprised to see Sujatha coming to check on her and lies to her about being ill. Meanwhile, Ganga’s bowl of payasam falls from her hand symbolising a bad omen. Vilasini asks Ganga to hide it from Akhila and continues to make another one. Will Anand find out Ganga’s identity? Stay tuned to find out!

Chembarathi Special: What Will Happen To Kalyani If Ganga Marries Anand?