Chembarathi 02 March 2020 Written Update: Kalyani Gets Back Into Anand’s Room

In today's episode of Chembarathi, Kalyani hides from Anand about Ganga’s involvement in trying to kill Krishnan. 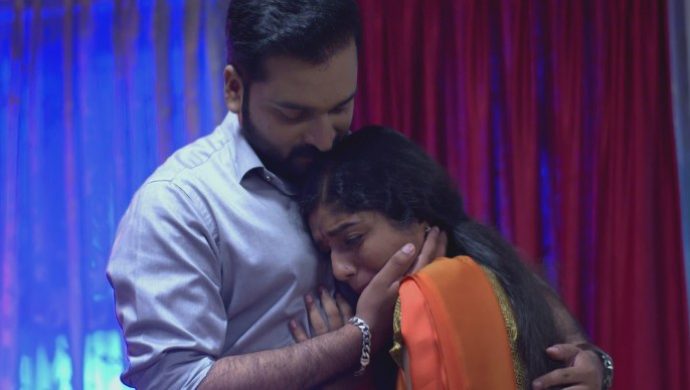 Previously on Chembarathi, Vilasini and Jayanthi are surprised to see Anand worried. They suspect that he has lost something valuable and follow him. Jayanthi and Vilasini make use of the opportunity to search Anand’s room.

Vilasini is shocked to find a bindi in Anand’s room and suspects it to be Kalyani’s. Meanwhile, Aniyankuttan asks Anand about his sister’s whereabouts. He also tells Anand about the nightmare he had and urges him to bring back his sister.

Kalyani, who is hiding under the staircase starts crying when Aniyankuttan tells Anand that Das has been missing Kalyani and has fallen ill. Aniyankuttan goes back to his house and asks Das about the brand ambassador competition. He also asks Das how he would feel if Kalyani won the competition.

In today’s episode of Chembarathi, Aniyankuttan insists that Das answer his question about his reaction to Anand marrying Kalyani. Das tells him that he won’t let his children do anything disrespectful to Thrichambarath and he expects the same from Kalyani. Das is surprised to see Anand approaching and goes to greet him. The latter lies to him about Kalyani returning in two days from the dance school.

Anand is quick to call Subramanian and ask him to help look for Kalyani, at the temple that she frequently visits. Later at night, Kalyani switches off the house’s inverter and gets back into Anand’s room. Anand and Subramanian get back to the room after a long search for Kalyani. She is relieved to see Anand but goes back to hiding when Aravind enters the room.

Kalyani overhears Anand explaining his love for her and comes out of hiding when he starts crying. Aravind and Subramanian leave the room as the couple embrace each other. Kalyani lies to Anand that she saw a nightmare about Krishnan, and switched off the AC to save him. She hides about Ganga’s involvement in trying to kill Krishnan.

Kalyani runs to hide inside the room when Akhila knocks on Anand’s room. Anand tells Akhila that Ganga’s presence in Thrichambarath is inauspicious and continues to express his dislike towards her. Akhila stops him before leaving the room, and yells at him for not liking her decisions. She goes to Krishnan and tells him about Anand not liking Ganga. Akhila tells him that she will soon make Anand understand that her decisions concerning his marriage with Ganga are right for him. What is Akhila planning for Anand? Stay tuned to find out!