In today’s preview of Chembarathi, Akhilandeshwari is shocked seeing the necklace that she gifted to Kalyani, along with the letter. 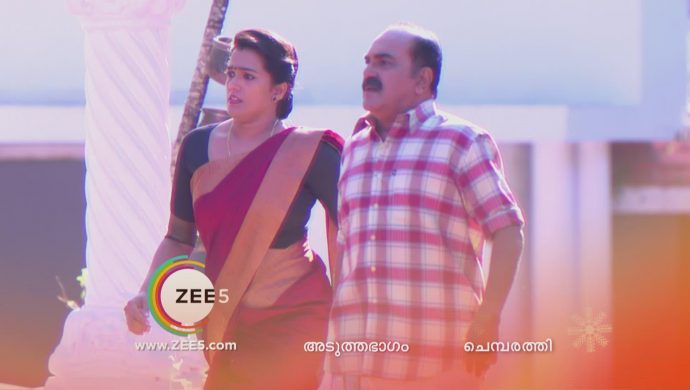 Previously on Chembarathi, Nandana pretends to faint as per Vilasini’s plan, to make Aravind cancel his business trip to Bangalore. The evil duo suspects that he is lying about the trip, and doubts that he is taking Kalyani to Mumbai. Akhilandeshwari gets worried as Nandana starts vomiting and immediately calls a doctor.

As the doctor takes Nandana inside for further examination, Vilasini announces that the latter is pregnant. Aravind is quick to go outside and search for Kalyani, who was supposed to wait for him. Aravind tries to understand where Kalyani has disappeared, as he doesn’t find her at the spot that they had decided to meet at. He goes back inside the house and seeks permission from Akhila, to leave for Bangalore. The latter asks him to cancel his trip, and makes him take Nandana to the hospital, for further treatment.

Meanwhile in Mumbai, Anand is frustrated as Kalyani’s phone is unreachable and he complains about the same to Subramanian. Just then, the doorbell rings, and Anand is surprised to find Kalyani at the door. The latter starts sobbing as she notices Anand’s injuries, and tells him about the letter. Anand grows anxious and is surprised when he learns that she travelled to Mumbai alone. She starts blaming the necklace for the negative turn of events in Anand’s life.

Back in Thrichambarath, Das is disturbed by Kalyani’s sudden disappearance and gets angry at her for not informing him about her whereabouts. Sujatha is shocked, when she finds Kalyani’s letter in the kitchen and runs to Das. The latter finds the letter and gets upset upon reading it.

In today’s preview of Chembarathi, Kalyani gets scared seeing calls from Das, on her cell phone.  Meanwhile in Thrichambarath, Das and Sujatha run to Akhilandeshwari, to inform them about the letter and Kalyani’s sudden disappearance. Akhila is shocked to learn about Kalyani and is disturbed as she sees the necklace. Vilasini starts reading the letter aloud and blames Kalyani for irresponsibly leaving the important necklace behind, with a piece of paper. Will Akhila help Das? What will Vilasini’s next move be to hurt Kalyani? Stay tuned to find out!

In today’s preview of Chembarathi, Akhilandeshwari is shocked to see the necklace that she gifted along with the letter from Kalyani.