In today’s episode of Chembarathi, Anand is Vilasini asks the goldsmith to proceed to make the Thali even with a bad omen. 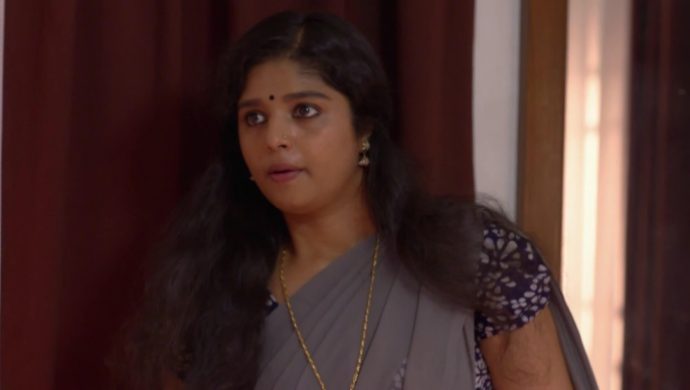 Previously on Chembarathi, Anand is disturbed by Akhila’s rude comments about Kalyani when she tells him that she likes Kalyani better than the other servants. Anand gets angry at the condescending tone in her voice, but Krishnan is quick to console him by telling him that his mother prioritises his happiness above everything else.

Ganga plans on using a chemical mix in the mehndi and make Kalyani apply it on her hand. Vilasini is pleased by her plan and asks her to use it against Kalyani to make her leave Thrichambarath. Later, Anand meets Kalyani outside the house and apologises for his mother’s rude comments.

Anand shows Kalyani a recording device to use as a bug to get to know about Ganga’s real plans. He asks her to plant the bug in Ganga’s room as he can’t be seen entering Ganga’s room alone. Kalyani is reminded of Ganga’s challenge and agrees to do it.

In today’s episode of Chembarathi, Anand shows Kalyani the method to fix the recording device and sends her to Ganga’s room. The latter goes and fixes the recording mic under a stool. Anand is reminded of how the detective had earlier told him about Ganga’s alias in Mumbai and gets disturbed when he thinks about Kalyani’s complaints about her.

Later at night, Anand thinks about Akhila telling him how she likes Kalyani better than all the other servants. Anand is disturbed by Akhila’s comments and he is also reminded of Krishnan’s warnings. Kalyani comes to meet him and asks him about the recording device and Ganga.

Anand tells her about how the family has called for a goldsmith to make the Thali for his marriage the next day. Kalyani is surprised when Anand asks her to make Payasam as it is a tradition in Thrichambarath for the girl who is getting married to make the same. Kalyani is elated by Anand’s requests and agrees to do the same.

The next day, as the Goldsmith proceeds to make the Thali, the lamp goes off, symbolising a bad omen. He tells Vilasini about how it will be inauspicious if he continues making it. Vilasini warns him by telling him that Akhila will be angry at him if he doesn’t.

Stella goes to Kalyani’s house and asks her to come to Thrichambarath to help Ganga with making the Payasam. Kalyani gives an excuse of being unwell but is confused when Stella insists. Will Kalyani help Ganga? Stay tuned to find out!

Entertain Your Kids At Home With These ZEE5 Malayalam Film