In today’s episode of Chembarathi, Ganga complains to Akhila about Anand humiliating her. 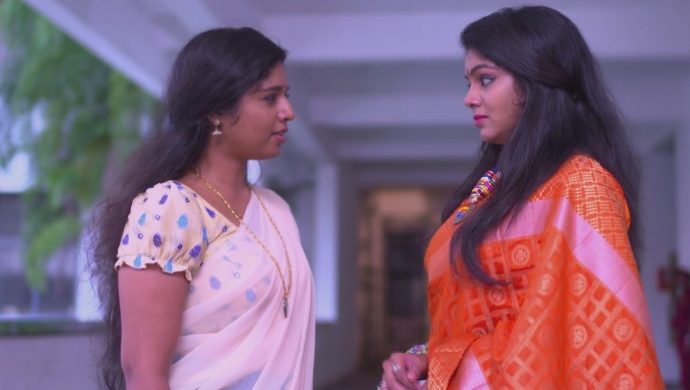 Previously on Chembarathi, Anand and Kalyani continue their practice for the competition. Meanwhile, Ganga prepares lunch for Anand and goes to meet him in his office. Aravind sees her walking in with the lunch and directs her to the cafeteria. As Ganga insists Anand to have lunch with her, he gets irritated and asks her to leave the office. Humiliated by Anand’s words, Ganga thinks of a way to get back at him.

In today’s episode of Chembarathi, Aravind goes to the cafeteria to meet Ganga. Aravind mocks her by telling her that he will have the lunch that she prepared. Frustrated from Anand’s rejection, she discards the lunch in a dustbin. Aravind goes outside to meet Kalyani and tells her about Ganga’s outrage.

As Ganga comes outside the office, she confronts Kalyani. The latter tells her about the value of food and asks her to think of the many people in the world who starve. Infuriated by her presence at the office, Ganga tells her that she should know her place and starts demeaning her. She also adds that she is Anand’s fiancée and Kalyani being a part of the competition is not going to change anything.

Kalyani is quick to retort that she is willing to fight for Anand and that she has complete trust in god. Angered by her unexpected reply, Ganga goes home and complains to Akhila. She tells her about the humiliation she faced when Anand refused to have lunch with her. Akhila consoles her and asks her to prepare food at home for Anand.

Back in the office, Anand and Aravind help Kalyani with the preparations. They give her books to read and show her ways to present herself better. The couple practice until nightfall and visit a temple on the way. When the couple reach home, Anand asks Kalyani to prepare food for him as he skipped lunch. Kalyani runs back to her house to prepare food for Anand, as he waits for her outside. What will be Ganga’s next move against Kalyani? Stay tuned to find out!