In today’s preview of Chembarathi, Ganga asks Kalyani to stay out of her way as she is Anand’s fiancée. 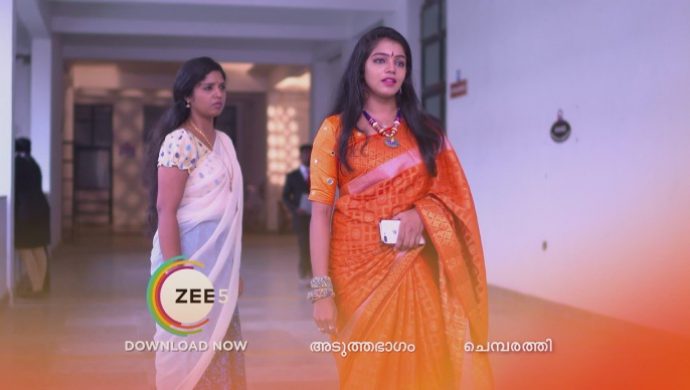 Previously on Chembarathi, Kalyani is surprised to see Anand making a drawing of her. Aravind walks in to the office and starts praising his brother’s artistic skills. Anand asks him to start preparing Kalyani for the competition.

As the practice progresses, Kalyani tells him that she is doubtful of Akhila accepting her as Anand’s wife. He reassures her of Akhila not going back on her word as she is liable to protect the company’s goodwill in media.

Meanwhile, Ganga asks Akhila’s permission to visit Anand in the office and prepares lunch for him. She runs into Aravind at the office and he directs her to Anand. Ganga requests Anand to join her for lunch. The latter gets irritated by her constant requests and yells at her. Ganga proceeds towards the cafeteria, feeling humiliated by Anand’s words.

In today’s preview of Chembarathi, Ganga confronts Kalyani at the office premises. She tells the latter about Akhila fixing her marriage with Anand. Ganga asks her to stay out of her way as the competition is not going to change the fact that she is Anand’s fiancée. What will be Kalyani’s reply to Ganga’s threats? Stay tuned to find out!

#5 Destinations In Kerala For The Perfect Valentine’s Day Weekend