In today’s episode of Chembarathi, Anand apologises to Kalyani for Akhila treating her like a servant. Read the full update here. 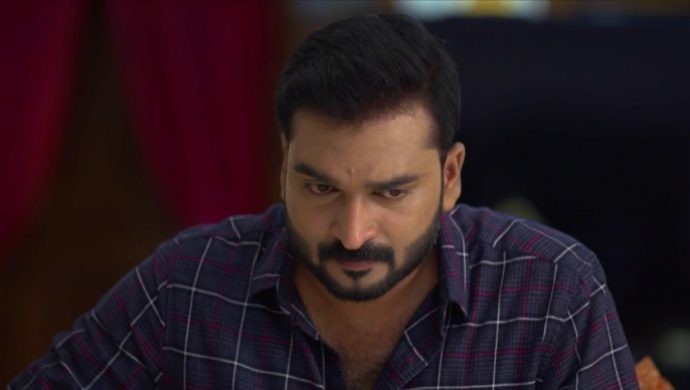 Previously on Chembarathi, Akhilandeshwari yells at Aravind for making Ganga’s father drink and for speaking ill of her. Ganga complains to her about Aravind trying to ruin her marriage with Anand. Akhila is quick to warn Aravind of the consequences if he were to try something similar again.

Meanwhile, Ganga, Vilasini and Jayanthi plan to humiliate Kalyani if she returns Thrichambarath. Das asks Kalyani to be careful when Sujatha comes to call her for work. Ganga slaps Sebastian, the man posing as her father for falling into Aravind’s trap and asks him to stay alert. She tells him how she had sneaked into Aravind’s room and deleted the video on his phone.

Kalyani eavesdrops on Ganga’s conversation with Sebastian and is shocked to see her slapping him. Later on, Ganga tells Vilasini that she is disturbed by Akhila inviting Kalyani for the pooja. The duo further plans to humiliate Kalyani during the mehndi function.

In today’s episode of Chembarathi, Akhila asks Anand if he is happy to see Kalyani back in the house. Anand is agitated by the condescending tone in her voice but Krishnan is quick to console him by telling him that his mother prioritises his happiness above everything else. Aravind makes use of the opportunity and asks Akhila if she likes Kalyani or not.

Akhila tells Aravind that she likes Kalyani more than all the other servants because she is loyal. Anand is disturbed by Akhila’s comment but is distracted when he notices Subramanian and Stella exchanging glances. Meanwhile, Ganga plans on using a chemical mix in the mehndi and making Kalyani apply it on her hand. Vilasini is pleased by her plan and asks her to use it against Kalyani to make her leave Thrichambarath.

Anand apologises to Kalyani for Akhila treating her like a servant and reminds her of the time he had promised to marry her in the temple. Anand shows her a recording device to use as a bug to get to know Ganga’s real plans. Anand asks her to plant the bug in Ganga’s room as he can’t be seen entering her room alone. Kalyani is reminded of the time Ganga challenged her after the ancestral jewellery wearing ceremony and agrees to plant the bug.

For more entertainment and drama, watch ‘Sa Re Ga Ma Pa Keralam’ streaming now on ZEE5.
Get all the live updates on Coronavirus on ZEE5 News Section

Chembarathi Special: Reasons Why Akhilandeshwari And Krishnan Are Very Real As A Couple

Entertain Your Kids At Home With These ZEE5 Malayalam Film