The special cameo appearance of Anand and Kalyani in Sathya Enna Penkutty you shouldn’t miss! 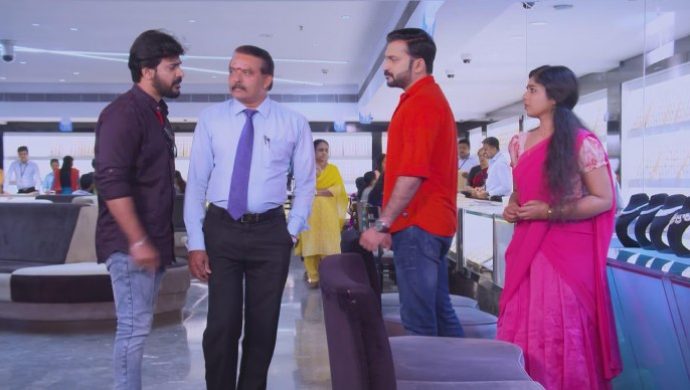 ZEE Keralam recently surprised its fans with a special cameo episode in Sathya Enna Penkutty. Our favourite couple Anand and Kalyani from Chembarathi met Sudhi at a jewellery store as Sudhi went shopping for a birthday gift for Divya. Here are the details from the special episode of Sathya Enna Penkutty!

Missed out on the latest episode of Sathya Enna Penkutty? Watch it here:

In the special episode of Sathya Enna Penkutty, Sudhi goes to a jewellery store to buy an ornament as a birthday gift for Divya. He selects an expensive diamond necklace and asks the salesman if he can see it. He finds Kalyani waiting for Anand and requests her to try it on before buying it.

Kalyani helps out Sudhi in finding a necklace, and eventually he selects one and asks the salesman to keep it for him. While he talks on the phone about the necklace to Divya, Anand comes looking for Kalyani.

Anand selects the same necklace which Sudhi had selected but Kalyani protests against it. When Sudhi gets back, he argues with Anand as he had selected it first.

The manager of the jewellery store intervenes as Anand and Sudhi start arguing about the necklace. Kalyani tries to stop Anand but he insists on taking the same necklace when Sudhi tells the manager that he has forgotten to take his wallet.

Sudhi is disheartened when Anand tells him that he will take the necklace as he is unable to purchase it. Sudhi is quick to call his friend Cleetus to come with the money, but Anand and Kalyani leave the store after buying with the necklace. Divya gets agitated when Sudhi tells her that he lost the necklace to Anand.  The latter and Cleetus discuss a suitable gift for Divya’s birthday as she gets angry at Sudhi.

What other cameos would you like to see on your favourite shows? Tell us in the comments below!

Take This Quiz To Find Out Which Character From Chembarathi You Are!