Get ready to LOL with these funny scenes from ZEE5 Malayalam movies. Don't miss! 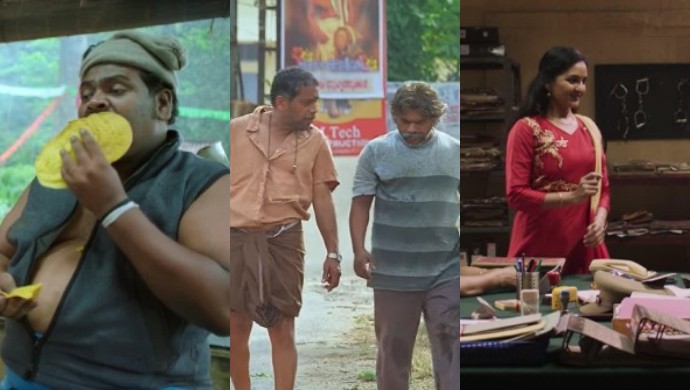 All of us can agree that we have all gone back and re-watched our favourite comedy scenes from movies. There is nothing better than a good laugh and here are #4 best comedy scenes from ZEE5 Malayalam movies to give you that LOL moment again.

Missed out on Madhura Raja starring Mammootty? Watch it here:

#1 Madhura Raja: Aju Varghese has always given Malayalis with the most memorable comedy scenes from his movies. With his recent performance in the industry, he has become a true contender to the likes of Malayalam comedy legends like Jagathy Sreekumar, Harishree Ashokan and Salim Kumar.  One of the quirkiest moments from Madhura Raja is when Suru played by Aju Varghese walks into the local tea shop with his British slave. He tells the crowd that he is making the tourist work for his money as his wallet gets stolen. Hilarious moments follow when the Brit asks his master about the sweets in the tea shop.

#2 Kadam Kadha: Jose and Thambi from Kadam Kadha are surely one of the funniest duos we have seen in a long time in Malayalam movies. Essayed on-screen by Manikandan Pattambi and Sinoj Varghese the duo is day drunk and always ready with a quirky reply. When Jose and Thambi are walking down the road discussing ideas to get the next drink, a car stops and a man asks for directions. Thambi’s funny reply when the man asks for directions to a funeral is the best. The group in the car soon figures out that the duo is drunk and speeds away. How does this duo get entangled in the tale of Cleetus and Giri? Watch Kadam Katha find out!

#3 Mohanlal: Directed by Sajid Yahiya, Mohanlal tells the quirky tale of two hardcore fans of the legendary actor and the many quirky incidents that follow because of their devotion for the actor. One of the funniest moments in the movie is when Meenukutty essayed by Manju Warrier makes her entry on the screen. She copies Mohanlal’s signature fighting style and beats up guys who speak ill of the actor. Funny moments follow when she gets arrested and the officer in charge gets surprised by her boldness. Meenukutty tells him about the past seventeen warnings she got and turns the serious conversation into a funny exchange of one-liners.

#4 Children’s Park: Directed by Shafi, Children’s Park starring Vishnu Unnikrishnan, Dhruvan and Sharafudheen tells the funny story of three friends who try to find the meaning of their life. The three get entangled in a conspiracy bigger than what they were expecting when they reopen an institution for children. One of the best comedy scenes from Children’s Park is when Vishnu Unnikrishnan’s request for food gets constantly rejected by a tea shop manager as he says that the food in the display is for him. He requests the cook but unfortunately, he also turns out to be making food for himself. The tea shop scene from the movie became an evergreen hit as the trio finds out later that it’s owned by two foodies.

Chembarathi 05 March 2020 Preview: Anand Thinks Of A Way To Get Kalyani Out Of His Room

Chembarathi 05 March 2020 Written Update: Kalyani Tries To Sneak Out For The Competition