The lead actor of ‘And The Oscar Goes To’ film, recently posted several gorgeous pictures taken during his travels to the Middle Eastern country. 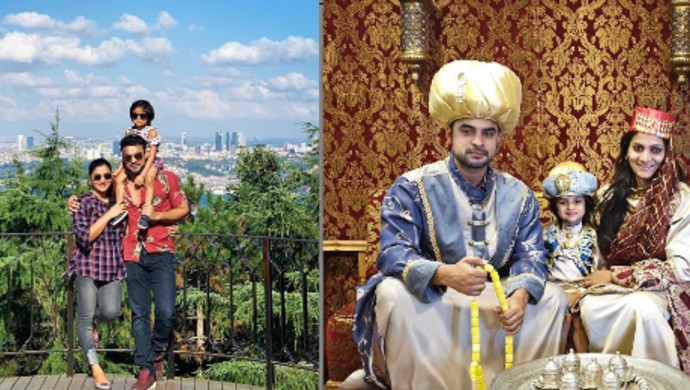 Tovino Thomas, who starred in the popular movie, And The Oscar Goes To, is quite a traveller. Judging by the pictures posted on his Instagram account, he has travelled to several countries in Asia. But it is the pictures taken while he was travelling in Turkey that we have fallen in love with.

If you haven’t already watched the trailer of And The Oscar Goes, then check it out here. Scroll below to read the rest of the story.

We love this picture of Tovino and his family, dressed up in Ottoman style costumes. This looks like fun, doesn’t it? Tovino also looks like genuine Ottoman Turk, we must say.

Did you know that Turkey is spread across two continents? One part of Turkey lies in Europe and the other part in the Asia. The two are divided by strait of Bosphorous, a narrow water body that connects the Black sea and the Mediterranean sea. This lovely picture posted by Tovino gives us a bird’s eye view to Europe, whilst standing in Asia.

Besides dividing Asia and Europe, the Bosphorous also has gorgeous sunsets and is ideal for cruising up and down the shoreline, soaking up the view of magnificent palaces, mosques and other heritage structures of Anatolia on one side and Thrace on the other.

Cappadocia is one of the most popular tourist destinations in Turkey, world renowned for its spectacular rock formations. Another USP of this region is the cave-like dwellings and rock cut buildings carved into the hillside, some of them dating back to the Bronze age. A popular tourist feature here is to take a leisurely hot air balloon ride over the valley, soaking in the view of ancient settlements that seem untouched over the centuries. Many of these caves have been turned into resorts now and make for an enjoyable stay.

Cappadocia is known for its ceramic work and taking up a short pottery course is all the rage for many tourists in Cappadocia, including actor Tovino Thomas, who also signed up for one such course.

This would have to be one of our favourite pictures among the lot. The pottery in Cappadocia is made from white clay sourced from nearby hills. The painting work on the pottery is usually done by women, using naturally occurring oxides as paint colours. Blue seems to be a favourite among tourists, rendered in that colour using cobalt oxide. It also reflects the azure blue of the seas that surround Turkey as well as the characteristic Iznik tiles used on the walls of the famous Blue Mosque in Istanbul.

So, if you haven’t already been to Turkey, we are pretty sure these pictures would send you hot-foot to check out the best prices for a trip to Turkey. As one of Tovino’s followers commented on his photos, “Turkey has the magic of taking a bit of your soul away and make you go back again and again to find it.”(sic)

If you liked the film, And The Oscar Goes To, then also check out other Malayalam films, like Thattampurath Achuthan, starring Kunchako Boban and streaming on ZEE5.

Watch Ente Mezhuthiri Athazhangal - The Love Story Of A Chef Who Falls In Love With A Candle Designer.