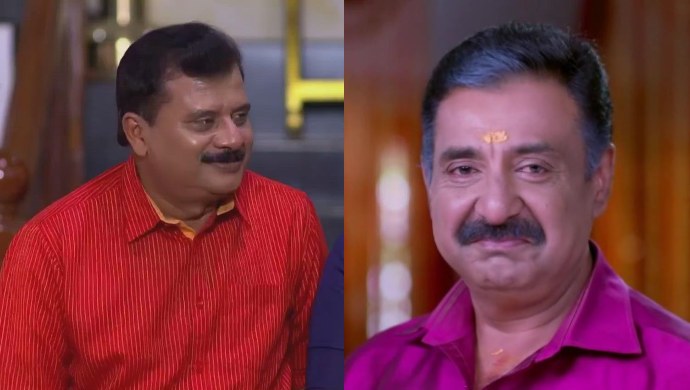 Yatheenthran from Pookalam Varavayi and Chembarathi’s Krishnan are two such characters that we hold close to our hearts for the many memorable moments. Didn’t we all love Yatheenthran when he adopted Nithya to be his daughter when she was in need? In Chembarathi, Krishnan also considers Nandana as his own daughter despite being wronged by her in the past. Such moves on their part make us look up to these wise men on the TV shows who solve any problems with ease. We bet you guys have also noticed that both men have quite a few character traits in common. Here are some major similarities we found between the two:

Both Yatheenthran and Krishnan consider family as their first priority. Despite having several business affairs to handle, Krishnan is always ready to help Akhilandeshwari with family issues. Likewise, Yatheenthran also puts his family matters above everything else in consideration.

Yatheenthran agrees to adopt Nithya when she couldn’t complete the engagement ceremony as she didn’t have any close kin. Similarly, Krishnan too accepts Nandana as his daughter even after Aravind’s opposition. Yatheenthran and Krishnan are both forgiving and kind which makes them the most respected members of their families.

Despite being occupied with several responsibilities and personal matters, both the fathers are always approachable for advice. Krishnan is ready to accept his sons’ decisions regarding business affairs and always offers a helping hand. Similarly, Yatheenthran feels proud of his daughters and is always ready to help them.

#4 Ready to play second in command

Krishnan and Yatheenthran are the heads of their respective families, but still, they listen and agree to their wives. In the past, we have seen Vilasini ridiculing Krishnan for playing the second fiddle to Akhila even when he holds a powerful position. On the other hand, Yatheenthran’s decisions are always based on Parvathy’s opinions regarding the same. The two men not only act as pillars of strength but also support their life partners and are willing to act by their decisions.

Krishnan and Yatheenthran are the most respected in their families for being the best at giving the right direction to their children. When Aravind was depressed about Nandana leaving him, Krishnan was the first to talk to him in the family. Also, Yatheenthran was the only one who was willing to advise Abhimanyu when he decided not to enter Puthanveedu because of his ego.

Which was your favourite moment from Yatheenthran and Krishnan? Tell us in the comments below!

Quiz: Find Out Which Telly Character Would Be The Perfect Lockdown Girlfriend For You