Aishwariyaa a.k.a Akhilandeshwari has acted with famous film stars including Mammootty, Rajnikanth and Kamal Haasan. 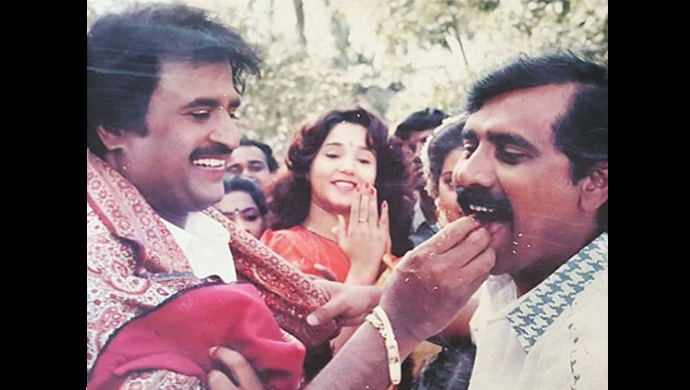 Did you know that Akhilandeshwari of Zee Keralam serial Chembarathi, a.k.a Aishwariyaa Bhaskaran has a filmy background. The actress is the daughter of famous film star Lakshmi. As such, she began her acting career in the film industry and over the course of it, she has acted with several heavy weights including Rajnikanth, Kamal Haasan, Bhagyaraj in Tamil, Mammootty in Malayalam and Rajendra Prasad in Telugu. So when Aishwariyaa shared some throwback pictures from her film industry days, it was a treat to see other famous stars from the 80s and 90s, sharing the frame with her. It was also interesting to see the kind of fashion that was in vogue in the late 80s, early 90s. Check out these posts.

@rajinikanth sir in frame and all I can think about is the cake 🙄😂. #tbt #actorlife #rajinikanth😎 #filmstar #90sfashion #curlsforthegirls

This picture shows Aishwariyaa in her early days in the film industry standing in the background, presumably on a movie set, while Rajnikanth feeds cake to a crew member. Short cropped hair with curls was very much in vogue then and Aishwariyaa too is sporting a similar look.

Blast from the past. At the Lux launch in 1993. #90sfashion #actorlife #luxstars

This photograph gives us major throwback feels. Can you identify these 90s actresses. Many of them have starred in famous films from that decade. Beginning from the left, we have actresses Sukanya, Kasthuri, Aishwariyaa in the centre in a white outfit, Gautami and Rubini.

A mother and daughter can best friends and worst enemies all at the same time ♥️. Love you ma #tbthursday #tbt #starkid #actorlife #likemommylikedaughter #motherslove

This is our favourite among all the pictures. It features a young Aishwariyaa with her mother, Lakshmi who is a veteran actress in all four southern film industries.

Regardless of the profession you are in, sometimes over the course of your work, you forge lasting friendships. It’s the same for Aishwariyaa and Sai Lakshmi. As actors they have worked together as youngsters in their 20s, 30s and now in their 40s, says Aishwariyaa in her post.

If you are new to ZEE5, here’s what you need to know about Chembarathi. Aishwariyaa plays the lead role in the series as Akhilandeshwari, a wealthy power woman and the head of her family. She rules her family with an iron fist. However, problems crop up in her life when, unknown to her, her son marries the household cook due to some disturbing circumstances. Will Akhila be able to navigate these problems. To find out, watch Chembarathi every night on ZEE5.

Watch International Local Story, The Tale Of An NRI Doctor Who Returns To India To Get Married